JMeter is a load testing tool which helps you to analyse the performance and scalability a web application. It does so by simulating multiple concurrent users browsing the web application. This way you are not only able to estimate the numbers of users your web application can handle, but also where bottlenecks are and perhaps how to fix them. For that reason JMeter is usually used in addition with other monitoring tools and profilers such as tideways, for example.

Load testing is a common requirement in e-commerce projects, especially when challenging performance requirements needs to be addressed. For that reason Shopware provides a basic set of JMeter scripts for Enterprise customers, in order to be able to estimate the scalability of the system before going live.

No you'll find the following directories: 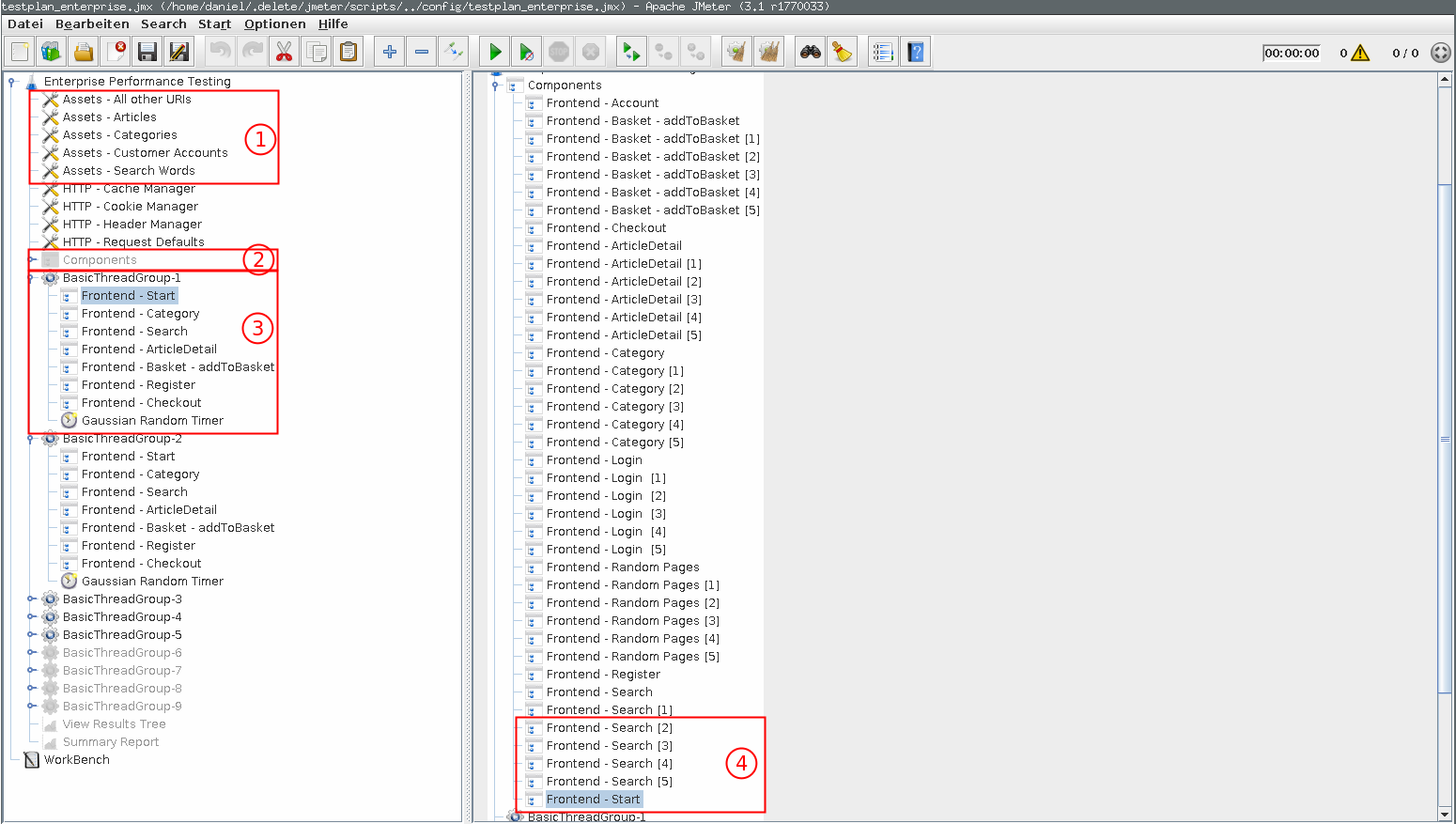 In order to edit the test plans, just run ./scripts/jm-edit.sh. It will open the JMeter application. The Shopware JMeter Scripts generally defines 9 different components (2) you can use in your test plans:

Most of these components use certain assets (1): For the Frontend - Category component, for example, a random category URL is required - and provided by the corresponding asset.

The actual test plans are defined in so called "thread groups": Each thread group copies or links one or more components and therefor "tells a user story" such as "a user visits the start page, searches for 5 items and then adds two items to cart" or "a user browses 3 categories, adds 1 item to cart, registers and performs an order". This way you can try to model real user's behaviour in your test plans. In production, for example, just 3 to 5% of your users will actually perform a checkout. So it makes sense to create one thread group only browsing the shop and one thread group which actually performs checkouts.

First edit the file config/testplan_config.properties. By default it will look like this:

Furthermore you need to specify SHOP_USER_PASSWORD: JMeter will use this password when logging in as a user. If you are load testing an existing database dump, you will usually need to set the passwords in the database:

This will set all passwords to "shopware". JMeter will now be able to log in as any of these users. As an alternative you can also generate dummy data automatically by using the Shopware CLI tools.

In order to generate all assets, just run ./scripts/all-uris.sh. If you just want to (re-)generate a part of the assets, there are specific scripts such as scripts/uri-accounts.sh or scripts/uri-search.sh.

Running the load test and inspecting the results

In order to execute the load test, just run scripts/jm-run.sh. It will execute the test plan for the configured execution.duration: 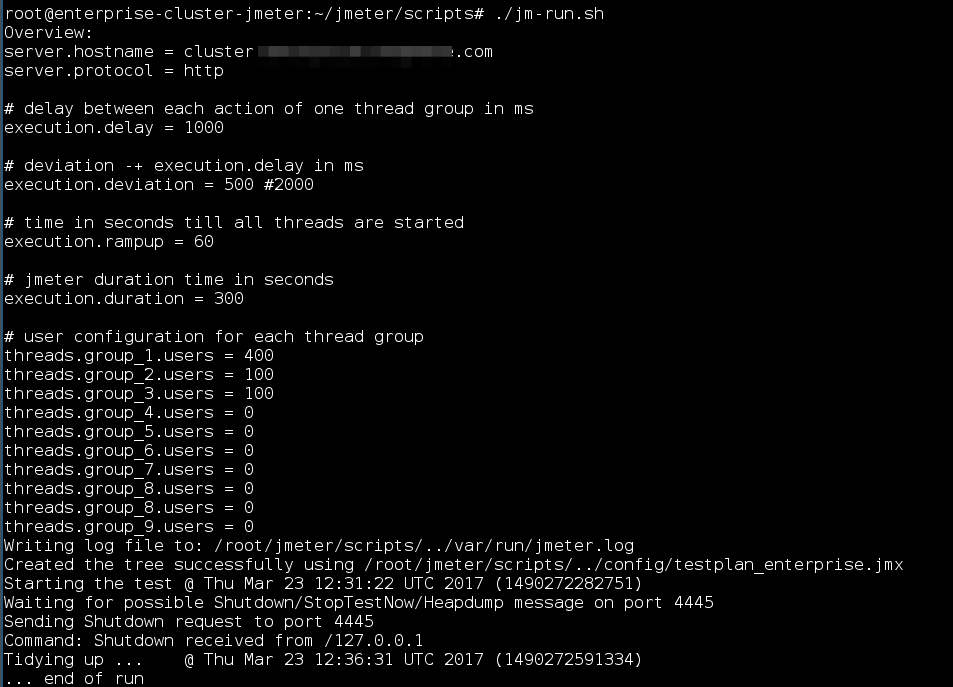 While the test plans run, its usually helpful to watch the load of the application servers and the database: If disc load, RAM usage or CPU usage are extremely high, you might have found a bottleneck. But also keep in mind, that the number of connections can be a limiting factor for all of these servers.

After the test plan exited, you can run ./scripts/jm-edit.sh again in order to open JMeter. At the bottom of the navigation on the left side you find "Summary Report" (1). Click on it and open the CSV file of your JMeter run (2): 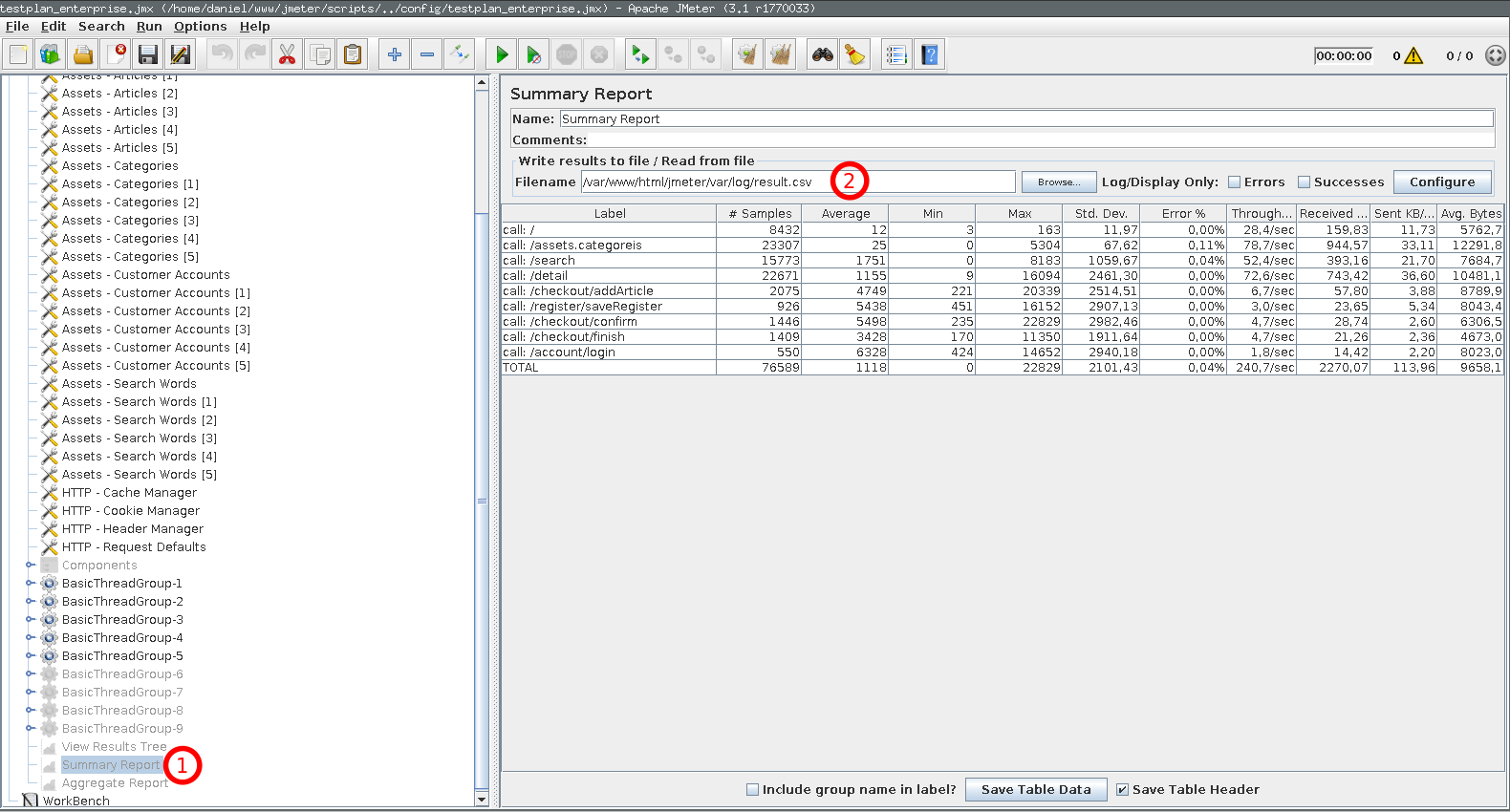 JMeter will present you all URLs which have been called, the average response time, number of samples, percentage of errors and other useful metrics. You can even inspect every single request by selecting "View Result Tree" from the navigation. After opening the result.csv file, JMeter will show you every request with the corresponding headers and body. This is especially useful, if you want to debug errors.