Shopware was built with plugin developers in mind, so there are powerful ways to modify the default behaviour of the system without losing backward compatibility. In this post I want to discuss the technical details of Shopware's hook system.

Generally there are several ways to extend Shopware. By default we distinguish global events, application events and hooks (for a brief overview see the plugin quick start guide). In addition to that, you are able to decorate Shopware's core services.

The main difference between events and hooks is the fact that events are emitted at certain places in the source code where a kind Shopware developer had extensibility in mind and added a (hopefully) useful event for you to use. Hooks are a more generic approach and allow you to extend any public or protected method in certain classes. So, even if no explicit event is available, a hook might help you to extend Shopware's functionality. You are then able to modify input arguments, return values or replace a method entirely. For that reason, the hook system can be considered as offering aspect oriented programming (AOP) in Shopware.

AOP (aspect oriented programming) is a programming paradigm that addresses cross-cutting concerns in software. It allows you to add behaviour to your objects, without having to modify the objects themselves. As PHP does not support AOP natively, it is usually added using other patterns like the proxy pattern. So from an architectural point of view, one could consider Shopware implementing extensibility of some objects by using an AOP based paradigm. The up and downsides of this will be discussed in the Best practice? section.

Technically speaking the hook system makes use of the proxy pattern. Hookable classes are not instantiated directly but with a generated proxy class, which inherits from the hooked class.

Whenever you request a core class, e.g. via Shopware()->Modules()->Article(), Shopware will return such a proxy for the class name (see \Shopware_Components_Modules::loadModule for more details). You can test it easily by printing out the class name of your article core class: echo get_class(Shopware()->Modules()->Articles()); will print Shopware_Proxies_sArticlesProxy.

What does the proxy do?

So we already know, that - behind the scenes - we are always working with the proxy objects and not the actual class. In most cases this does not make any difference, as the proxy object inherits from the base class. But how does the extensibility come in?

The proxies can be found in cache/production____YOUR_REVISION___/proxies. When you subscribe to a hook using

in your plugin's bootstrap, Shopware will regenerate those proxies and create a file like this:

In this case we have three methods:

So whenever sGetArticleById is called, it will run executeHooks in the HookManager. The result of that call will then be returned.

What does the HookManager do?

The actual logic of the executeHook method is quite simple:

First of all the \Enlight_Hook_HookArgs object is created. That object will be passed to any event listener, so you might already have used it.

Then the before hooks are processed:

The method getHookEvent will just generate the event name from the context objects, in our case it could be sArticles::sGetArticleById::before. Then a usual notify event is emitted, allowing you to modify the method arguments of the sGetArticleById call.

In the next step the replace hook is processed:

Finally the after hooks are processed and the result is returned ($args->getReturn()). 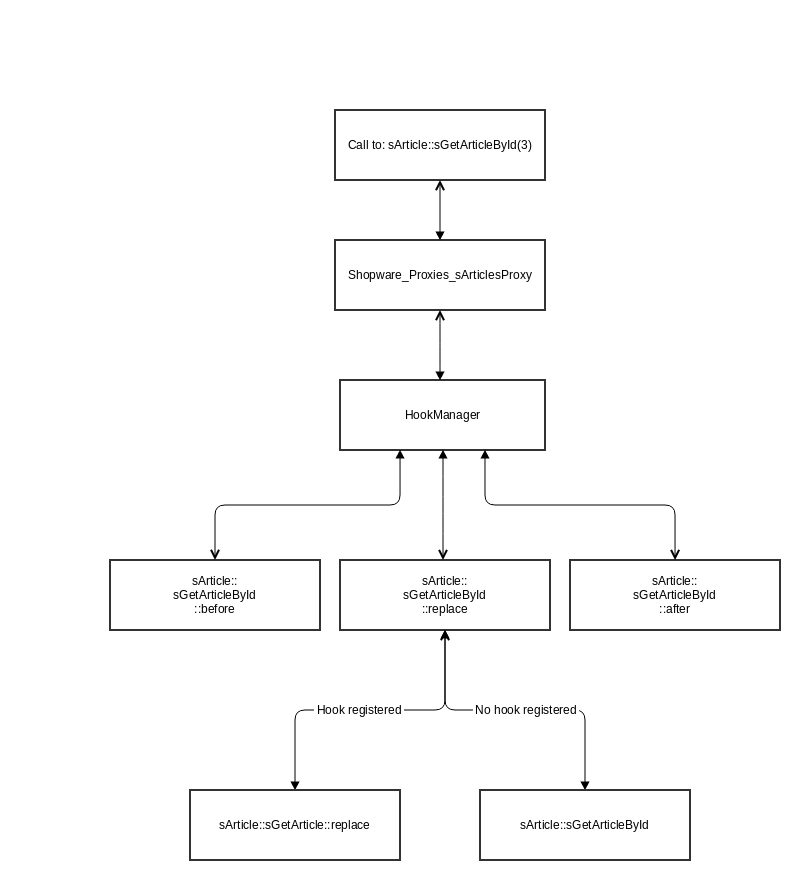 Hooks are a double-edged sword in some regards. They are stable, powerful and add extensibility to a wide range of objects without the need to take care of the extensibility in any single object. There are downsides, however. As hooks allow you to directly bind to public and also protected methods, hookable classes are hard to maintain and hook callbacks might rely on implementation details that might change. As there are no interfaces, it might be hard to detect those changes. Furthermore, replace hooks do not allow multi-inheritance. If plugin A and plugin B use a replace hook and do a executeParent at some point, the main class will be called always - so no nesting is possible, as it is using the decorator pattern. In addition to that, replace hooks tend to lead developers to duplicate core logic into their plugin. When newer Shopware versions update the original method (e.g. to fix a bug), replace hooks might still enforce the old behaviour.

For these reasons, events should always be preferred over hooks, especially the replace hook should be avoided when possible. Also that's the reason why only core classes and repositories are hookable in Shopware. For other object, especially when loaded from the DI container, decorators might be a suitable replacement.